How to Enjoy Jin Guan Yin 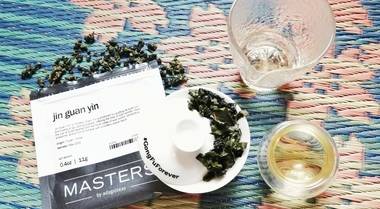 When it comes to oolong, there is such a wide spectrum to choose from. From the greener, lighter end of the scale, to the darker, more heavily oxidized, each tea provides an incredibly unique experience to each person who is given the chance to sip them. Normally, I would reach for oolongs that are on the darker side of the oxidization scale, but I am always open to trying out new oolongs because it's very rare to find one that I don't enjoy. Recently, I was able to try out Masters Teas’ Jin Guan Yin for the first time and my sessions with this tea did not disappoint.

For those of you not aware of Jin Guan Yin / Golden Guan Yin, it is produced by grafting Tie Kuan Yin and Huang Jin Gu oolong bushes, offering the best of both worlds and a well-balanced oolong. Grown at 800-1200 meters above sea level, Jin Guan Yin is hand-plucked in May from 12-year-old trees. The 7-8 cm long leaves have a one bud and 2-3 leaf composition. They are then roasted at around 65-80 degrees celsius.


Upon opening the package of tea, the dry leaves instantly gave off a beautiful aroma with floral notes of orchids and osmanthus blossoms of perfect strength, and not at all perfume-like. There's a hint of butter and freshly baked soft bread; subtle vegetal notes were also present, mostly giving me dried seaweed vibes. There was a hint of rice in there but it had a few layers of depth, such as freshly made warm sticky rice and toasted rice notes, similar to what you would find in a Genmaicha but not as prominent. Lastly, there was a subtle honey sweetness. I wish I could share this aroma with all of you reading this post, as many of you would find it hard to resist this tea as soon as it hit your senses. It immediately took me back to spring and given how cold it is right now, I really needed that reminder of late spring and early summer.

The dry loose leaves are rolled into a ball shape and vary in size - some are quite large balls that aren’t as tightly rolled, and some mid to small size balls that are rolled tighter. In terms of their color, they are varied in shades of green from dark to light, some yellow and golden brown spots are visible, but it is mostly a palate of greens again, evoking an image of a meadow or a forest with the sun shining through it on a late spring / early summer day, building that overall image more strongly in my mind before I had even started sipping.

After having done a brief rinse of these leaves, the aroma seemed to transform. Taking the notes from the aroma of the dry leaves like the sweet floral (orchids and osmanthus blossom) and butter, but also opens up and adds additional notes of milk bread buns with pistachio cream filling, and again there were also subtle vegetal elements like dried seaweed. Surprisingly that subtle sticky rice note was not present but the roasted rice note was. Almost all of the steeps during my session with this tea were a pale yellow with a tint of green. This tea has the same color to it as the shine from a buttercup flower when you hold it close to your skin - a hint of green hay. 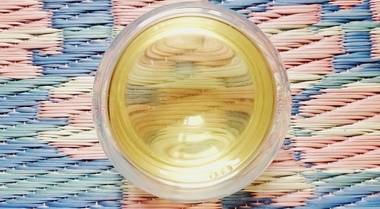 When it comes down to the way that this tea tastes, it’s very silky, buttery and it has a minerality reminiscent of wet beach pebbles warm from the sun that has been sharing on them. The floral notes that were pronounced in the aroma were much milder in terms of taste but not overpowered by any of the other notes within the flavor profile. The buttery vegetal notes of dried seaweed and buttered green beans take the forefront and work harmoniously with the sweet floral notes providing a great balance.

The minerality does a great job of grounding the tea and gives it some more substance as without it, it would definitely be a rather light tea overall and I don't think it would be anywhere near as balanced. The vegetal notes definitely give me a seaweed vibe overall but not fresh wet seaweed. It's more of a seaweed that has been dried and either used as a topping on hot sticky rice or used to make sushi. There's that freshly made warm sticky rice note combined with it and it doesn’t stand alone.

As steeps went on, the floral notes did start to dissipate, and overall I would have liked them to last for longer. The steeps without them were still fantastic and just as well-balanced as the steeps earlier in my sessions. For me, the one word that comes to mind when sipping on this tea is balance, because it’s without a doubt one of the most balanced Chinese green oolong teas I’ve had in a long time.

The minerality of this does add dryness to the mouthfeel, but it’s not so dry that it ruins the experience of the tea and instead contributes substance and depth. However, the mouthfeel of this tea is soft, light, and silky, with those florals returning in the aftertaste and lingering for quite a while, which was an aspect of this tea that I loved. Once those florals had dissipated in taste, it was nice to have them still be present even if it was in the aftertaste because it returned that balance.

Even after my cups and fairness cup were empty, this tea still kept on giving, leaving a distinct aroma behind that has notes of milk bread filled with melted cheese, dried seaweed with warm sticky rice, and asparagus finished in a pan with butter that has been browned and seasoned to perfection. I was surprised to see that the florals present from the start were not present in this aroma and that so many of its notes had transformed into something completely different. Compared to the dry leaves, the wet leaves were pretty similar. Of course, the leaves had now expanded and completely filled the Gaiwan. They were still a mixture of sizes and mostly light and dark greens with some dark brown and flecks of golden brown. This tea was a great experience and definitely helped me to relax and ease my stressed mind. I wouldn't say it had much effect on my energy level though. But I wouldn’t really expect a tea like this to do so, it’s more of a tea I would sip on slowly on a warm day than drink for the purpose of heightening my energy levels.

@MastersTeas | by adagioteas - copyright 2022
Privacy Policy   |   Cookie Policy
Ask us a question.
Anytime!
Questions?
Adagio Chatbot
You may ask me "Where is my order?" or "How much is shipping?" and I will gladly answer your question.
If you don’t like my answer, our customer support team will email you a reply shortly. Ask me!
>