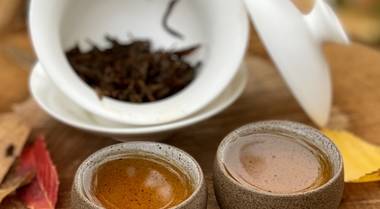 One of China’s spectacular black teas, it has many imitators, however, the Adagio selection is singular in its reflection of the very best wild teas hand plucked from ancient trees in the vibrant Wuyishan Nature Reserve.

Adagio Master Teas' Tongmu Jin Jun Mei is grown by farmer Wang Xiang Feng at 100 meters above sea level. The buds are 5cm long, hand-plucked in May from trees that are more than one-hundred years old, and fired only once, and by hand. The buds undergo an oxidation process for a maximum of 15 minutes producing the dried golden and dark brown leaves after processing that offer hints of spice, cocoa, and hops echoed in the brewed tea.

Notes for Traditional and Gaiwan Brewing

Feel free to experiment with brewing. Steep leaves the traditional way, for 2 to 3 minutes at 212°F., for a rich cup redolent with natural sweetness and a dry finish. Deeply satisfying, this is a special treat. Multiple infusions are a given.

Ot, brew with shorter steeping times and cooler-than-boiling water temperature using water at 195°F. to steep the leaves for 45 seconds in a gaiwan for a gentler infusion, then increase the steeping time for up to 2 minutes for subsequent infusions. The flavor is intense, rich, almost creamy with no astringency or bitterness. Its multiple levels of complexity, its edge of cocoa, and soft spiciness give this black tea the seminal “full-mouth feel” that is thick, velvety, and enormously satisfying.

A gaiwan treats the steeping process more like brewing a delicate green tea or pouchong. To do that, heat water to full boil and pour in some into the waiting gaiwan to warm up the vessel. Pour water over small cups, and tea pitcher, if using.

Discard the water from all the cups, pitcher and gaiwan. Add the tea leaves to the gaiwan and, using the slightly cooled water, pour over the tea buds using a circular motion around the inner edge of the gaiwan and then over the leaves. This infuses the leaf buds gently instead of shocking them into releasing their flavor too quickly. Pour this water out as it is used only to rinse the leaves, to awaken the intense flavor of the tea leaf buds.

Finally, pour water into the gaiwan over the leaves and allow to steep gently for under a minute, noting the fragrance. Steep longer to taste and with each subsequent infusion, increase the steeping time.

In the traditional way of Chinese tea producers, this tea’s name conjures specificity in its description through a filter of poetry:
Tongmu is the village in Fujian Province where it is grown.

Jin means gold for the golden edge of color in the leaves, the golden liquor, and the precious metal.

Jùn is spirited or galloping horse, often used to imply the hope of rapid good fortune.

Méi means eyebrow, associated both with longevity in Chinese culture, and the shape of the leaves themselves. (Think Golden Eyebrows vs Chun Mei or Precious Eyebrows.)

The Topography of Tong Mu

Foggy weather abounds for nearly four months each year contributing to this area’s microclimate. The region has volcanic rock formations out of which many of the tea bushes grow, thick vegetation throughout the region, and a wide, natural biodiversity. Its proximity to the Nine Bend Brook (Jiuqu Xi), is part of a unique topography that includes mountain spring water which pours down every slope of the mountains. The brook, also considered a river, has nine distinctive twists that attracts wild-water rafting enthusiasts from around the world but it is the spaces between the river and the imposing rocks where the tea grows. In Tongmu Village that includes 455 hectares cultivated by 343 farmers who grow teas from the cultivars Xiao Cai Cha aka Qi Zhong, Shui Xian, and Rou Gui.

The Legend of Black Chinese Tea

One legend traces 100% oxidized black tea in China to the mid 16th century and to an error. The story goes that soldiers entering Tongmu Village frightened the villagers so that they escaped into the mountains, leaving the processing their tea behind them. The soldiers ravaged the village, plundering for food and supplies. They thoughtlessly stepped on the drying tea leaves, breaking them, and fully exposing them to the air.

After several days hiding in the mountains, the villagers cautiously returned, grateful the soldiers had fled. But their gratitude was squelched when they found their village’s wealth, its tea leaves, literally crushed and over-oxidized. Undaunted, they added roasted horsetail pine instead of traditional bamboo charcoal to mask the severe oxidation and created something new, a scented, tea they described as red for its typical color in the cup. Most recipes that follow this ancient recipe are under the Lapsang Souchong category, one of many variations of fully-oxidized teas those of us in the west call black to describe the intense dark color of the leaves.

A Tea for Today

Tongmu Jin Jun Mei, however, is anything but a rescue effort to salvage compromised tea. Instead this fairly new varietal introduced in 2005. The tea’s labor-intensive production begins with hand plucking the modest production of 50 to 100 grams of buds per tea bush. It takes about 12,000 to 14,000 individual buds to produce one kilogram of fresh tea. Discarding the outer leaves exposes the most delicate buds resulting in an exquisite, sweet nectar that is both complex and thoroughly satisfying. A treat, for special occasions, one that I still dream about.