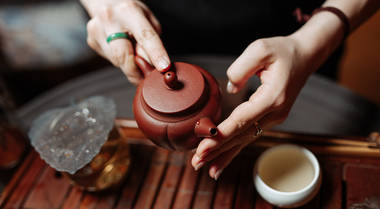 In Chinese culture, offering respect to one another, particularly those who are senior to us or are of a higher station, is a natural part of successful relationships among families, communities, or business associates.

Originally, to kowtow was considered the highest form of reverence. It was a serious gesture involving the entire body to express supplication. The person of lower rank would kneel down to the floor knocking his head three times either as an act of prostration to his superior, sometimes during religious ceremonies or other times to request services from local magistrates. In the most solemn ceremonies, involving royal protocol, a “grand kow tow”– kneeling from a standing position three times, would be expected.

The Legend(s) of Kow Tow and Emperor Qian Long

Legends of the origin of kow tow are like any legend; those that persist have a hint of charm even if historians cannot always verify them. The most common legend of kow tow dates to the Qing Dynasty and the reign of Emperor Qian Long aka Ch'ien-lung (1711-99.) He ruled for six decades and is considered China’s last great emperor. He waged military acquisitions of land, supported the arts, yet had his ups and downs. One of his quirks was to lavishly and enthusiastically welcome foreign diplomats despite the fact that he turned down whatever request they made, without exception. (Apparently, even the most fervent kowtowing does not work if the emperor is not interested.)

Emperor Qian Long loved to travel throughout his kingdom to talk with his people without the trappings of the court. To do that, he traveled always in disguise and his servants and companions were instructed to behave as if they were equals, yet forbidden to reveal who he was.

One day, at a teahouse, the emperor poured tea for himself, a startling thing to behold. Then, to the further astonishment of all who were dining with him, the emperor poured his servant tea. Stunned but feeling obligated to kow tow, the servant stopped himself as this would reveal the emperor’s true identity. Instead, the servant bent his fingers to imitate bending his legs in traditional supplication, tapped the table with his knuckles, and began the centuries-old tradition of expressing gratitude and respect by table tapping when one’s cup is filled with tea.

Another legend is that a waiter stood a few feet away from the table and, lifting a copper teapot high into the air (not unlike the Moroccan tradition.) He poured water into a tea bowl perfectly, spilling nary a single drop. Fascinated, the emperor took the teapot and tried to duplicate this feat, serving his companions who, like the servant in the tale above, were stunned and quickly chose to tap the table three times as a way to kow tow without revealing their social standing.

Other stories abound and one sounds credible considering his ongoing military prowess. After one skirmish led to a particularly amazing victory, he wanted to acknowledge his soldiers with something special, like a toast to their bravery or a fine tea served in their honor. His advisors, ever mindful of the separation between royalty and the peasant soldiers, advised him to eschew such bravura and, instead, simply tap his fingers in thanks when he was served. Not as dramatic, but sounds realistic.

The Origin of the Word

True or not, all these stories focus on the word kow tow (pronounced kaw taw) and its variations. It derives from the Cantonese word, kautàu, or the Putonghua/Early Mandarin word, kòutóu or kētóu meaning “knock head” based on the words kē which means ‘knock’ and tóu for ‘head’.

According to the Encyclopaedia Britannica, other spellings are common such as kotow, keitou, or
k’o-t’ou, among others, depending upon the various systems like Wade-Giles or Pinyin which have been developed to Anglicize Chinese words.

The tradition of kow tow has evolved from expressing subservience to a master or as a plea before a magistrate to a simple thank you when served a cup of tea. Modern day gestures include using a bent index and middle finger, or tapping your ring, if wearing one, three times after your cup is filled. Some traditionalists believe that three fingers, not two, should always be used signifying one for the head and the other two for the arms of the servant who may have originated the gesture. Another way is to use all five fingers, again tapping three times, to indicate the original idea of the whole body kowtowing to the floor.

Kow Tow with Dim Sum and Then Some

When visiting a dim sum restaurant, it is customary for the waiter to place the teapot in the center of the table. Any guest can be the host, serving those on either side of them before pouring tea for herself. Here, too, family or friends will acknowledge the tea pouring by tapping the table three times. For large parties, it’s great to take advantage of any Lazy Susan in the center of the table to pass the tea pot around so that others can pour for their seat mates who can kow tow their host’s efforts. 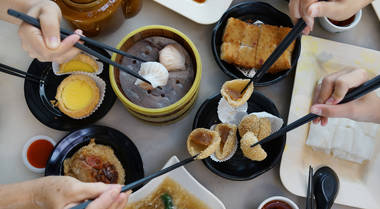 Thank You is The Point

Saying thank you with a kow tow may become your new favorite gesture whether at a dim sum restaurant where you dine on delicious dumplings, a Chinese teahouse where you catch up with community news or anywhere you share tea with others. Although dim sum or yum cha means “drink tea” in Cantonese, it takes on a deeper nuance in Mandarin with the phrase dian xin or “touch the heart.” A more wonderful definition of gratitude would be hard to find.