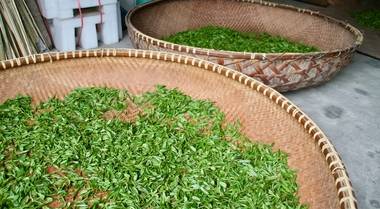 It’s April, before the rains come, which means only one thing in China’s Zhejiang Province: the nectar of the gods is about to arrive, pale jade leaves of the legendary Long Jing (Dragonwell) tea. The leaves are actually hand-plucked buds, harvested April 5th or Tomb Sweep Day, before the Qingming festival. Subsequent harvest will occur through May.
Dragonwell’s distinctive leaf shape is made by the skilled fingers of tea masters pushing the leaves in iron woks to roast them just enough to stop the oxidation process and give the leaves a rounded flavor profile. The leaves are then flattened exactly on the inside vein of the leaves. The final step is to fold the leaves, again by hand, into the shape of a flat stick. This breaks the leaves, releasing the enzymes that increase the aroma. As for the most important question, How does it taste? Delicately fresh -- with a sweet, nutty, buttery edge, not unlike grill-roasted freshly-picked white corn. In other words, green tea perfection! 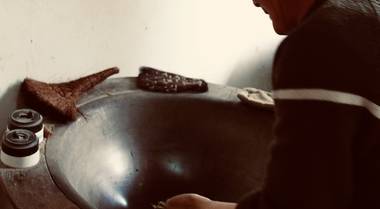 THE GRADING OF DRAGONWELL

Dragonwell leaves deemed high grade will be the same or similar size, shape, and color. Lower grades, while still flavorful, vary in shades of color from deep green to a blue-green and fall into seven official grades: Superior, Special, then grades 1 through 5.
The top three Dragonwell teas are those, like fine teas everywhere, grown at high elevations, in one of the five peaks of the West Lake (Xihu) area: Lion’s Peak, Dragon, Cloud, Tiger, and Plum Flower. These mountains of Hangzhou provide the leaves with cleaner air quality, and year-round mist and fog that contribute to the tea’s sweetness. They also provide shade, which gives Dragonwell its high levels of theanine, more catechins, and more nutrients, similar to shade-covered Gyokuro from Japan.
Lion’s Peak (Shi Feng Shan) is the most expensive Dragonwell for good reason: its fragrance, flavor, leaf appearance, and processing quality are superb. Meijiawu is significant because of its beautiful jade green color in the leaves. This highly aromatic and flavorful tea is grown in the Mejiawu village of Xihu. Tiger Spring is singular because subsequent infusions rarely lose their flavor. These three Dragonwells are high in quality and, as a result, high in price. Among the superior second harvests is Da Fo Long Jing, grown in Xin Chang, and known for its exceptional chestnut overtones. Two other Dragonwells are popular, although they come from different regions: Bai, from Anji; our Masters Teas selection is Yu Qian Anji Bai Cha. It is considered a “new” variety created only three decades from white tea bushes, and has the signature gentle, soft edge of white tea in its flavor profile. Qiantang, grown outside Xihu, is also gaining in popularity yet still offers the traditional cleanly-sweet Dragonwell character.

You may choose to wash the leaves by pouring on hot water to awaken them, then discard that water before the actual steeping. Use 3 grams of loose leaves, about 1 T for 8 ounces of water. It is critical that the water be either thoroughly filtered or from a reputable clean spring. Steep 1.5 to 2 minutes of water heated between 175-195 degrees F. Three steepings is typical. To take advantage of the visual beauty, consider brewing and/or serving the tea in clear glass.

A gaiwan is an excellent brewing vessel, and if the interior is white, that will show off the intensity of the color in the leaves. If using a gaiwan, preheat it by pouring water into it, at least half way. Tilt the gaiwan so that the water covers all the sides. Rotate until the cup is warmed, then discard that water. Add the tea in a shallow layer on the bottom of the cup, then add the water. Again, tilt the cup and rotate it to insure that all the leaves get similarly wet. This provides for a richer infusion. Add water to about half-inch from the rim of the gaiwan cup. Place the lid on the cup and steep for 1.5 to 3 minutes or to taste. One indicator of a completed infusion, like most high-quality teas, is the leaves will sink to the bottom of the cup signaling time to taste!
Refill as desired, usually when the cup is three-fourths empty. Steep one-half to one full minute longer for each subsequent steeping except for Shi Feng (Lion’s Peak) which rarely needs extra steeping to elicit its fine flavor profile.
NOTE: All brewing directions are guidelines. As always, adjust to your personal taste.

WHY IS THIS TEA CALLED DRAGONWELL?

Yes, there really is a dragon’s well, and it’s located in the Zhejiang Province town of Hangzhou. The water there is filtered through quartzite which makes it more dense than other spring waters and, more poetically, when light rain showers upon the spring water, patterns of the sensuous movements of a Chinese dragon appear on the water’s surface.
Lu Yu, who wrote the first book on tea in the 7th century, The Classic of Tea, mentions Long Jing, and writes that it originated during the Song Dynasty (960-1279) yet its popularity did not blossom until the Ming Dynasty (1368 to 1644 A.D.) Long Jing (Dragonwell) was unusual for the time because it was made of dried leaves. Previously, green tea was powdered, and mixed with water, not unlike Japanese matcha. Dragonwell achieved its fully-realized evolution under Kangxi Emperor who ruled from 1654 to 1722, when the tea achieved its highest designation, an Imperial Tribute Tea. The 18 original Imperial Tribute Tea bushes that grew during the Qing Dynasty (1644-1912) exist still and have become a tourist attraction. Imperial Tribute Teas became known as China’s Famous Teas in 1912, when the Xinhai Revolution officially declared end of monarchy rule in favor of the Republic of China.