A Guide to Premier Black Teas 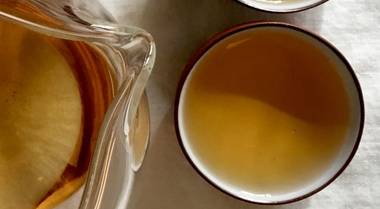 Although black teas are hugely popular in the United States, in our iced teas, and in our favorite breakfast blends, fully processed black teas took a long time to take hold in China where the more delicate whites and greens have always been the definition of tea. Then, first in Fujian and later in its neighbor, Taiwan, the complexity of oolong tea developed into the most varied processing style of all.

The Chinese don’t even call black teas black, but red because of the typical color of the brew in the cup. As with so many other examples, Chinese black teas offer the essence of terroir, the care of the processing, and the country’s ubiquitous soft edge of its black teas are always evident, especially in teas from Anhui, Yunnan, and a surprise to many, Fujian. Here, we share some stellar examples of 21st-century Chinese blacks including what may be an introduction to the newest adventure, black teas artfully crafted from teas made from traditional Wuyi tea trees.

Qimen Caixia (Sunrise Keemun aka Qimen Mao Feng grows in Anhui Province at 800-1200 meters on 60-year-old trees. This selection contains the proverbial bud and two (or three) leaves that are rolled to keep their long whole-leaf wiry shape highlighted with a few tips that, even in their dried state, offer up the seminal fragrance of orchids and sweet berries. This floral fruity essence, combined with a rumor of honeyed toastiness, provides a very satisfying cup, with a soft, deep finish. Best brewed with boiling water for 2-3 minutes, it offers a golden red infusion of delicate yet intense honey flavor for three infusions, each with a high level of caffeine. Qimen Caixia is a luxurious combination of tea-drinking pleasure that benefits from early plucking and full processing of the whole leaf, a fairly new process in this area.

Jin Kong Que (Golden Peacock) - Blessed with the trifecta of nature: high mountains, heavy rainfall, and fertile soil, Yunnan Province offers many spectacular teas, both black and green, but perhaps the premier black is Jin Kong Que. Named for the symbol of good luck and great fortune by the Dai people, its beautiful, large golden leaves come from trees grown in the Si Mao Mountains. The result is an intense fragrance both in the dried state and in the cup that is ambrosial. The signature Yunnan roundness and combination of sweet potato, honey, and cocoa offer a full-mouth full of bold flavor with barely a trace of astringency. A perfect stand-alone tea. Best brewed in a gaiwan to enjoy both its beautiful leaves and color. Steep in boiling water for 2-3 minutes, adding a minute or longer to taste with subsequent infusions, usually two more. This method increases both fragrance and flavor and its high caffeine makes it an ideal breakfast accompaniment. The innate softness of the tea also makes it excellent with a spicy meal.

Anxi Ruan Zhi Black (aka Qing Xi or Greenheart) is genuinely new, a black tea made from a Taiwan tea cultivar (Ruan Zhi) previously dedicated for oolong processing. Now grown in Anxi, in the oolong “capital” of Fujian, it has absorbed both the terroir and the slight climate changes to produce aroma notes of flowers with an invitingly mineral flavor, and hints of spice, apple, and autumn. The oolong heritage is evident both in the dry state, with its long, twisted leaves, and in the cup, with many layers of complexity one can taste even through multiple steepings. Again, take advantage of gong fu style steeping where the flavor of larger leaves is intensified by its brewing in a smaller-than-expected vessel. The result is a smooth, silky taste on the tongue and an aftertaste of cherry-chocolate sweetness, and a deep full-mouth body. Traditional teapot brewing offers just as many infusions of dark golden-red infusion with equally charming fruity-spicy sweetness. Deliciously accompanied by your favorite pastry; we loved cinnamon buns, cider donuts, and almond croissants with it.

Tongmu Jin Jun Mei, from the oolong-centric Fujian Province, is another unexpected jewel in the crown of Chinese black teas. Grown at high altitudes in the Tongmu village, an area considered the birthplace of Chinese black tea, it is a gorgeous mixture of young golden and very dark leaves harvested in May, from trees now more than a century old. They are long (5cm) and fired only once, by hand, for a set of 15 minutes. In their dry state, they emit a fragrance of spice, cocoa, and hops that offers a satiny mouthfeel where one can taste both sweetness and spice ending with a finish that is crisply dry. Best brewed with boiling water for 2-3 minutes, it offers at least two infusions of intoxicating tea-drinking pleasure.

Formosa Ruby 18 Black (Red Jade) is one of the newest introductions of Chinese blacks using a Taiwan cultivar that is a marriage of a wild Formosa tea plant with a Burmese Assam developed over an astonishing 50 years of research. The flavor is as unusual as its lineage: intense licorice notes with an unexpected underlayer of caramel and warmed vanilla bean ending with a cool menthol finish echoing its licorice presence. Brew this lightly, 30-45 seconds, albeit in hot (200-205º F) water so as not to overwhelm the vanilla and caramel. Brew longer to taste on what should be 2 more steepings.

© MastersTeas - copyright 2022
Privacy Policy
Ask us a question.
Anytime!
Questions?
Adagio Chatbot
You may ask me "Where is my order?" or "How much is shipping?" and I will gladly answer your question.
If you don’t like my answer, our customer support team will email you a reply shortly. Ask me!
>