A Guide to Pu Erh

by Diana Rosen
One Chinese legend defines puerh as “trouser bottoms” because the tea pickers would put the best leaves in their pants pockets to take home. They well understood what “The Classic of Tea” author Lu Yü declared, “Its goodness is a decision for the mouth to make.” 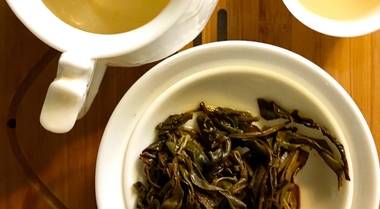 Puerh is an anomaly among teas, and especially Tribute Teas: it begins with fresh green tea, is intentionally aged, and often compressed into a variety of shapes. Depending upon the process (sha qing), Puerh can have a slight astringency when raw or a deep smoothness when ripe. At least a dozen grades are recognized, the highest being Palace Grade which contains tender young leaves, golden buds, and offers a soft, delicate taste.

Puerhs evolved from loose leaf to compressed bricks, first as a way to pay taxes to feudal lords, then it became a convenient way for traders to pack as much inventory as they could on the backs of camels, horses, and donkeys as they journeyed along the many routes referred to as the Silk Road. In addition to tea, these travelers sold or bartered porcelain, gemstones, jade, spices, and of course, silks along the 4,000 miles from China to Europe beginning in 130 BC during the Han Dynasty to 1453 when the Ottoman Empire shut off trade with the West.
Tea was both a commodity to sell and a beverage to drink, and the traders soon discovered something odd in the tea bricks. Over months (and sometimes longer) of travel, the natural moisture of the freshly-plucked green leaves slowly fermented them into a dark nearly black block and the taste changed considerably into a smooth, fruity, deeply rich beverage we now call puerh.

Scientists explain this as a reaction from microbes forming naturally on the tea leaves creating not only a change in the taste and texture on the palate, but the tea becomes a healthful digestive, soothing the stomach and relaxing the body. Even the dregs of the brewed puerh are useful when it is poured onto greasy dishes or pots, the tea cleans the grease away. And, puerh’s “friendly” bacteria may help eliminate fats in the body.

Today’s puerhs are sold in both loose leaves or in a variety of sizes and weights shaped in round cakes (bing cha,) to bowl shapes (tuo cha,) and rectangular bricks (zhuan cha).
Flavorings are common and the choices are legion including the classic Bamboo Fragrance Tea which uses a hollowed out piece of bamboo as a container for puerh leaves. The bamboo adds fragrance to the tea, the tightness of the bamboo compresses the leaves, yet it is easy to split open to take some tea for brewing, and can be re-closed for storage.
Puerh processing goes through several steps to become either raw (Sheng) puerh or ripe (Shou) puerh. Quality is found not only in the processing but in the leaves themselves from the large da ye cultivar, to golden buds or luxurious silvery leaves that will change as the molded rounds or bricks age. 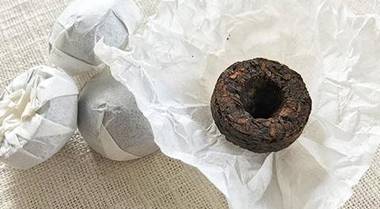 Ripe puerh is pan fired, rolled, sun dried then undergoes a wet procedure (piling) in which piled leaves are dampened with water, covered by a cloth, and allowed to stay warm, creating fermentation. Allegedly, some special bacteria are added to increase fermentation. The leaves are then ventilated and tossed to decrease the moisture and air out the leaves before shaping them into cakes. The leaves are placed into in a mold to shape them into a cake. Traditionally, the harsher tasting leaves are placed in the core, less tippy leaves are on the bottom, and the finer tippy leaves are placed on the top. During storage, the leaves continue to sweat, continuing to age in their own “juices” over the years which changes the leaf color from green or yellow to a reddish brown.

The tea liquor’s dark color in the cup indicates the amount of wet piling: the darker it is, the higher the piling that produces a taste that is thick with a scent of damp soil and bark that is pleasantly earthy. It is this intense taste that makes puerh a great segue tea for coffee drinkers who want a more assertive taste. After purchase, ripe puerh cakes should be stored in a cool area away from sunlight.

Raw puerh is a green tea that keeps its natural freshness and sweet aftertaste because it does not undergo piling with dampening. It is harvested, then pan fired, rolled, sun dried or dried in a special shed before being compressed into various shapes. The aging occurs in storage. The tea liquor is light in color and the taste is delicate not only because of the limited piling and its green leaves, but the shorter storage time. After purchase, Raw puerh cakes should be stored away from sunlight and excessive heat.

HOW TO BREW PUERHS:

To use a puerh cake, you can pull off a small piece with your fingers or use a puerh knife to loosen the leaves. This avoids breaking the leaves and provides more taste in the cup. The breaking/separating of the leaves assures that you will savor the blend in the core, bottom, and top of the cake to get the full spectrum of flavor.

The ideal brewing vessel for puerhs is an Yixing teapot, and one dedicated only to puerh brewing. This brewing vessel is the ultimate marriage of pottery art and the craft, and science, amassed during a multi-century tradition of growing, harvesting, and processing puerh.

The gaiwan is a worthy alternative brewing vessel as it allows the larger leaf puerh to release more flavor within the confined space of the small porcelain cup.

For either brewing method, heat the first, then discard the water then rinse the tea by adding 2 teaspoons of tea to 4 oz. of water, pouring just enough water to cover the leaves. Wait 10-20 seconds, then pour that water out. Repeat a second time if there is much dust. To brew, use water heated to 185-195°F. for Sheng cha, and steep for one to three minutes or to taste. For Shou cha, heat the water to near boiling (190-200°F.) and steep for three minutes. Boiling water should be reserved only for the earthiest Shou cha and steeping time is three to four minutes, or to taste. Add 20-30 seconds for each additional infusion, more or less, to taste. These re suggested brewing times; as always, follow the advice of Confucius to “Let your palate be your guide.”